Mauro Bonaventura has always been fascinated by God’s most mysterious machine: man. He tells his stories as if glass were
ink, using the flaming cannula as a pencil. Like a vascular surgeon,
he studied anatomy to reproduce a coherent synthesis of our
arterial system in glass. The Prince succeeded in endowing this
place with immortality. Still, he could never have imagined that
it would one day host anatomical machines in glass, at the
same time poetic and scientific.
As he found himself specializing in glass sculpture, Mauro
Bonaventura, a trained electronics expert, felt the need for a fuller
education, so he attended evening Art School for four years,
systematically studying art history, life drawing, the plastic arts, and
sculpture. Over the years, he has refined his technique to forge
his own unmistakable style. In the underground cavea of the
Sansevero Chapel, next to the two Anatomical Machines,
Mauro Bonaventura exhibits Homo erectus, a complex
polychrome glass sculpture, and Flying, the red diver, reminiscent
of the Tomb of the Diver in Paestum (5th century BCE).
What an emotional experience it is for Mauro Bonaventura
to be next to Giuseppe Sanmartino, who carved the marble
in the same way the Prophets spoke and wrote, i.e., in a trance,
inspired by God! The atmosphere wrought by the art in this
place is indeed divine. People visiting the chapel emerge
astonished and taken aback as if they have had the most
psychedelic of trips. Antonio Canova, it is said, would have
given ten years of his life to have sculpted the Veiled Christ.
Returning to the Anatomical Machines: can a cardiovascular
system be a work of art? Yes, it can, as the work of Mauro
Bonaventura demonstrates. Today, in the third millennium,
he has succeeded in imparting a lesson in aesthetic anatomy
full of ancient alchemical echoes. 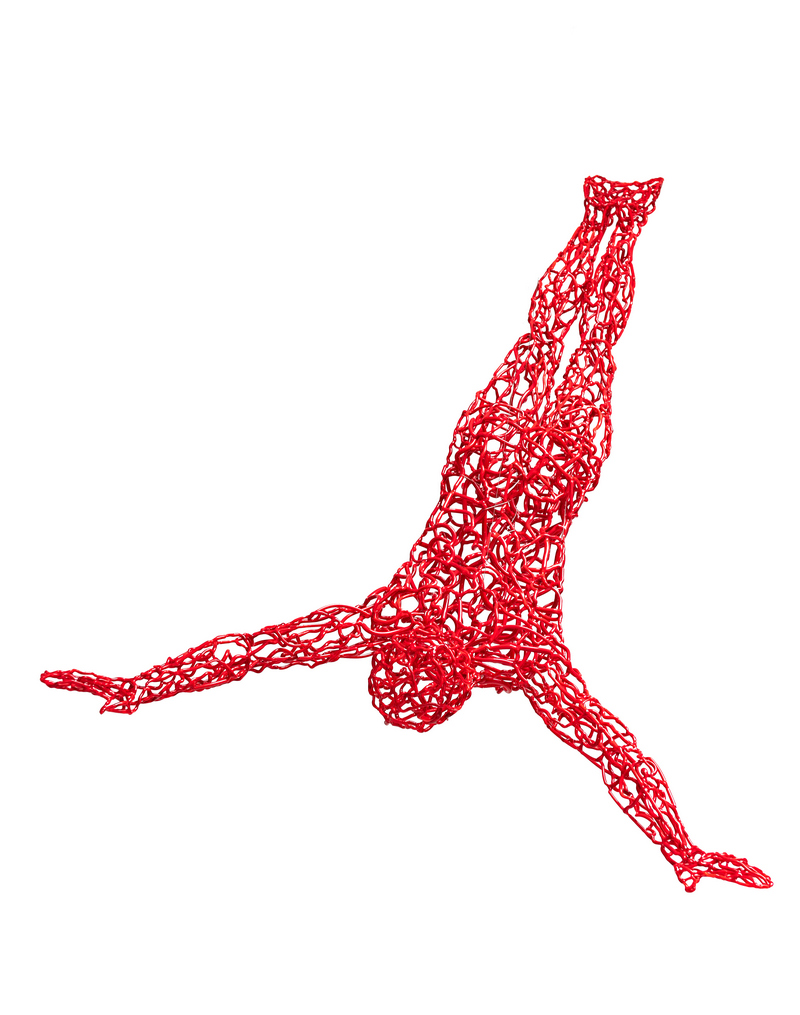 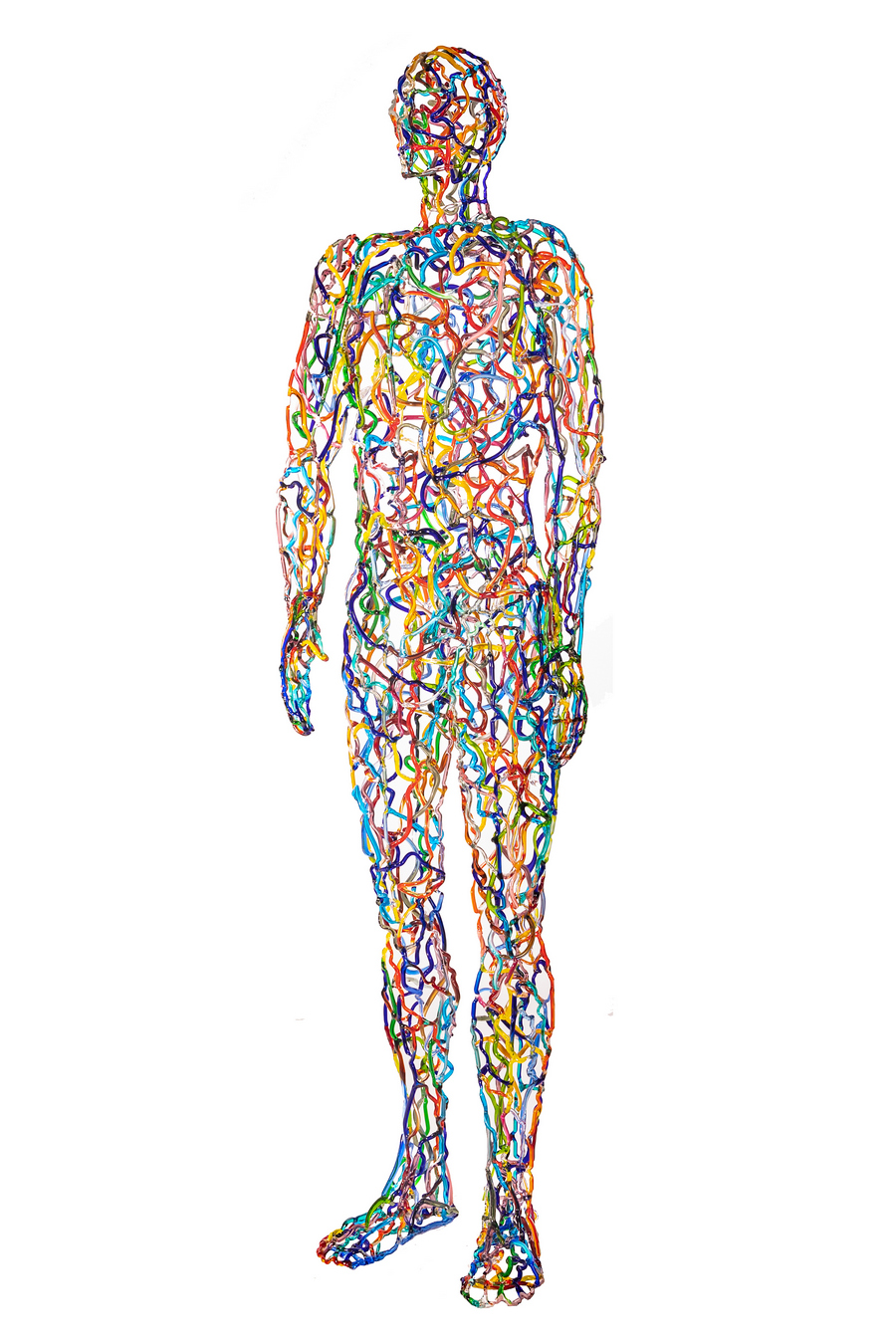 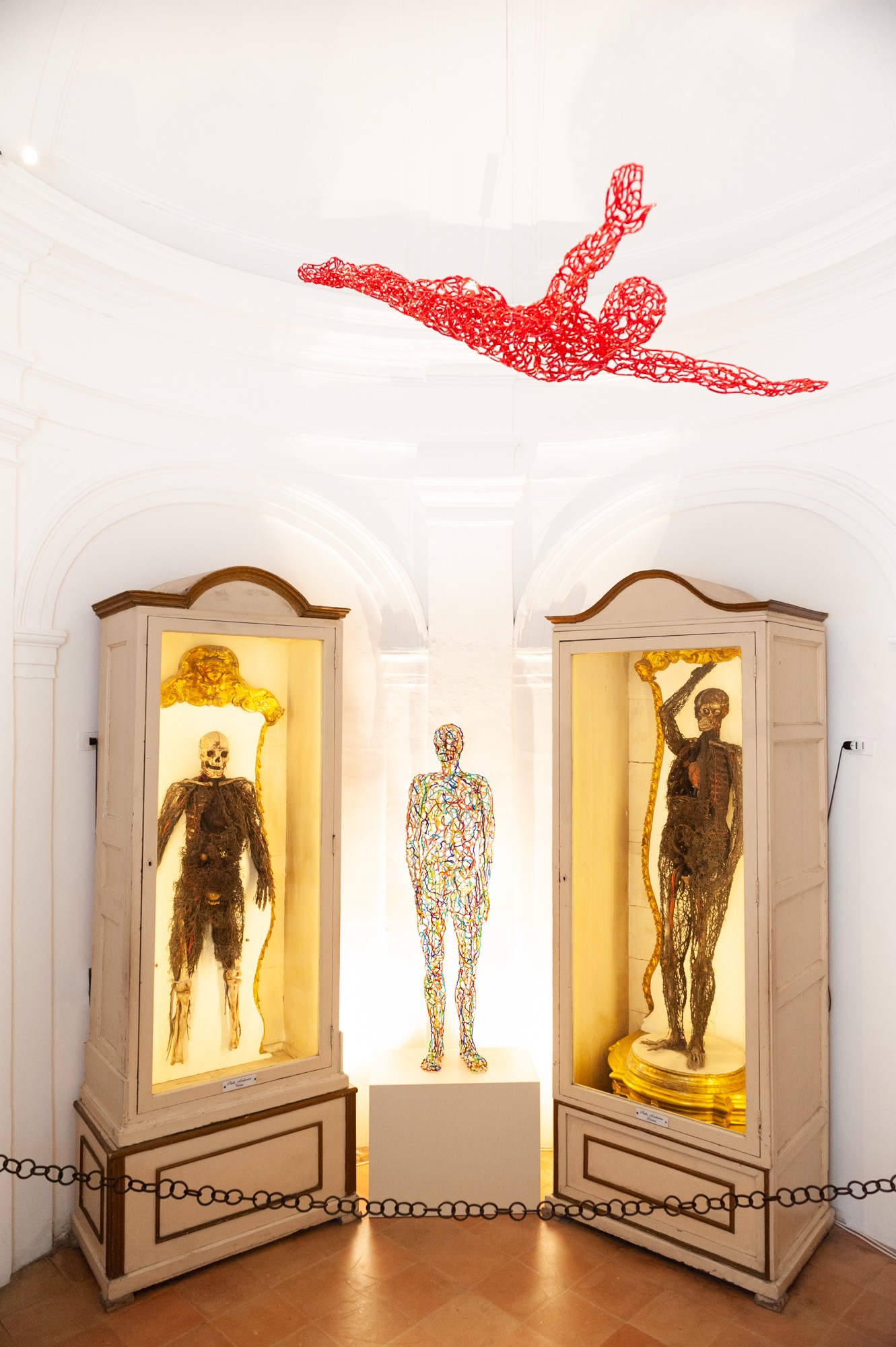 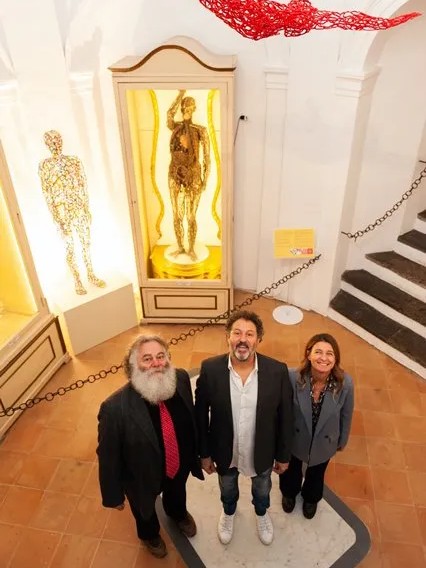 the curator and the museum director 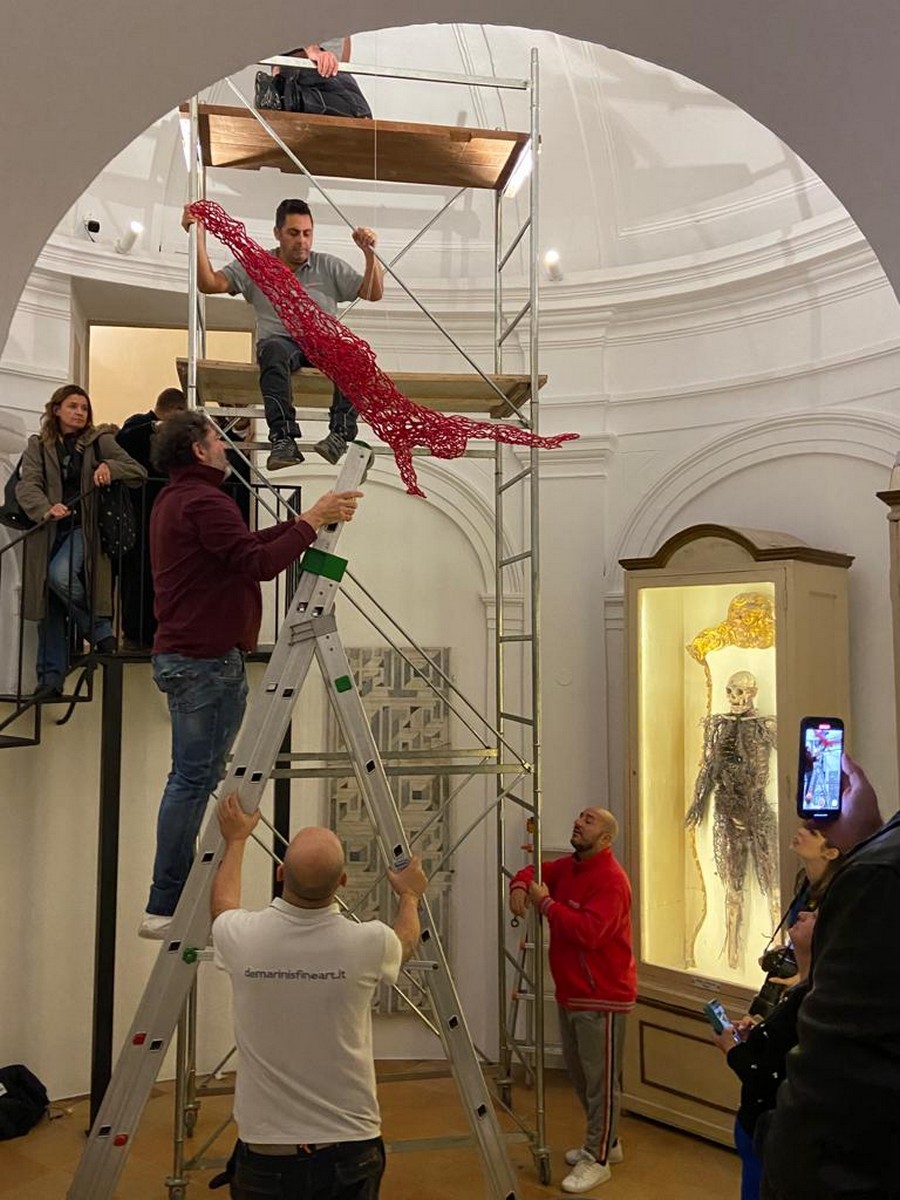 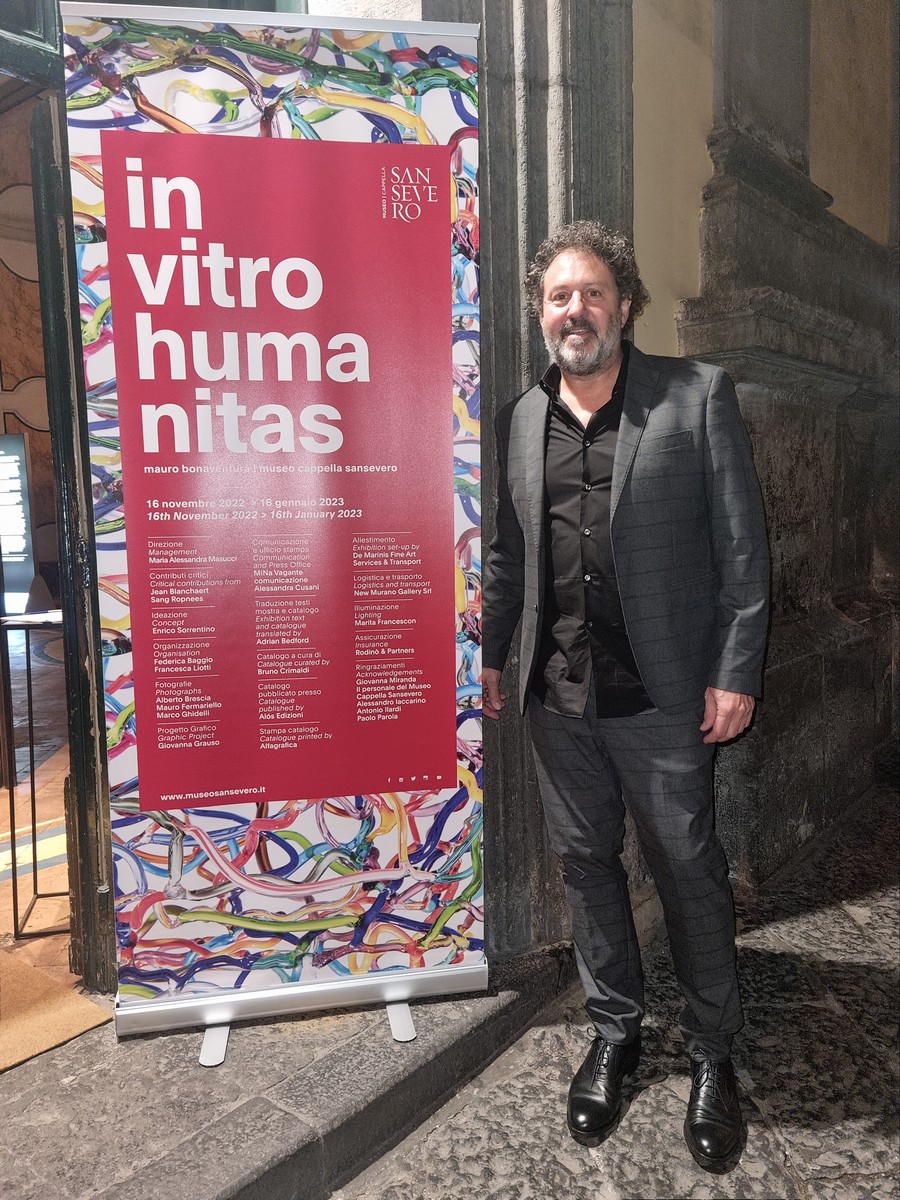 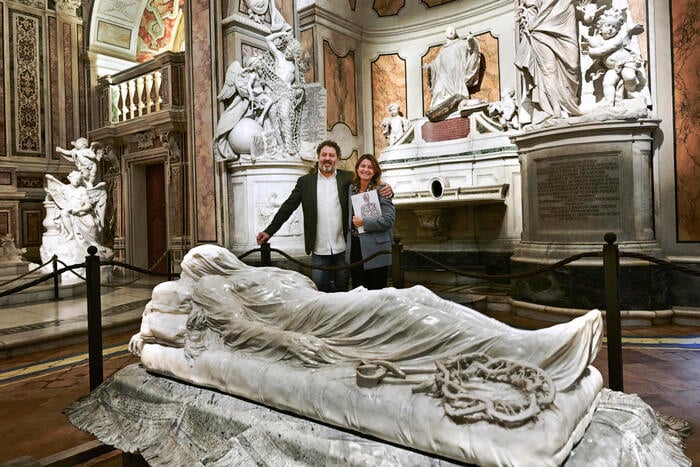 With the museum director and the Veiled Christ

The Veiled Christ is a 1753 marble sculpture by Giuseppe Sanmartino

Do not hesitate
to write to me

We use cookies on our website to offer you the most relevant experience by remembering your preferences and visits repeated.
By clicking on "Accept" you agree to the use of ALL cookies. However, you can visit "Cookie Settings" to provide controlled consent. Read More
Cookie Settings ACCEPT Reject

This website uses cookies to improve your experience while you navigate through the website. Out of these, the cookies that are categorized as necessary are stored on your browser as they are essential for the working of basic functionalities of the website. We also use third-party cookies that help us analyze and understand how you use this website. These cookies will be stored in your browser only with your consent. You also have the option to opt-out of these cookies. But opting out of some of these cookies may affect your browsing experience.
Necessary Always Enabled
Necessary cookies are absolutely essential for the website to function properly. These cookies ensure basic functionalities and security features of the website, anonymously.
Functional
Functional cookies help to perform certain functionalities like sharing the content of the website on social media platforms, collect feedbacks, and other third-party features.
Performance
Performance cookies are used to understand and analyze the key performance indexes of the website which helps in delivering a better user experience for the visitors.
Analytics
Analytical cookies are used to understand how visitors interact with the website. These cookies help provide information on metrics the number of visitors, bounce rate, traffic source, etc.
Advertisement
Advertisement cookies are used to provide visitors with relevant ads and marketing campaigns. These cookies track visitors across websites and collect information to provide customized ads.
Others
Other uncategorized cookies are those that are being analyzed and have not been classified into a category as yet.
SAVE & ACCEPT